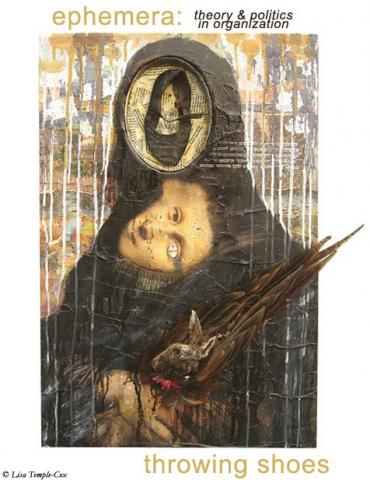 What is the structure of the social? If we accept organismic metaphors, the social is analogous to the body, usually the human body. The foot/shoe is the most basic foundation, the ground upon which the rest of the socialbody rests. By standing on two feet, the hands are freed to become tool making and using appendages, and the mouth is thereby freed from carrying to bear words instead. In structural terms, the foot/shoe functions as base to the face’s superstructure. But when a shoe is thrown at the face of power, a double inversion comes into play. On the one hand, the base rises up to strike directly at the superstructure and to challenge materially the basis of its legitimacy. On the other hand, the most basic sign of development and civilization – the shoe – is removed from the bare foot. As well as turning the foot’s prosthesis into a projectile weapon, this move symbolically reaffirms the body against a becoming-face or a becoming-technology. This moment of unshod insubordination asserts a basic, naked, human dignity in the face of dehumanization. These themes of insubordination and rehumanization, structure and ideology, run through the various contributions to this issue of ephemera.