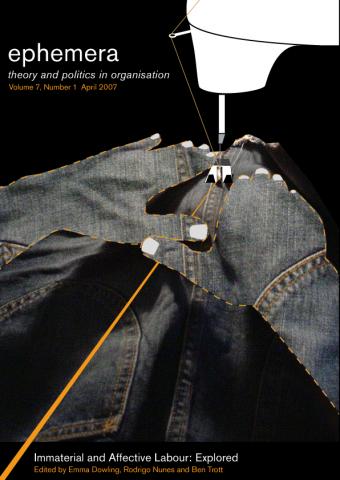 One of the important points of departure for us as the editors of this special issue was the hypothesis that, whilst the concepts of immaterial and affective labour – as theorised primarily by Maurizio Lazzarato, Michael Hardt and Antonio Negri – succeed, to a certain extent, in describing real and existing tendencies, their analyses have taken particular forms of this labour as the de facto ‘advanced’ forms of all the others. This has been the case to the extent that their particular (and singular) characteristics become imposed upon the rest. Important differences – related not only to the empirical realities of day-to-day labouring practices and their respective positions within (global) hierarchies of privilege and exploitation; but also in terms of the possibilities (or otherwise) for the self-constitution of antagonistic social subjects with a capacity to act in common – have been obscured in the process.