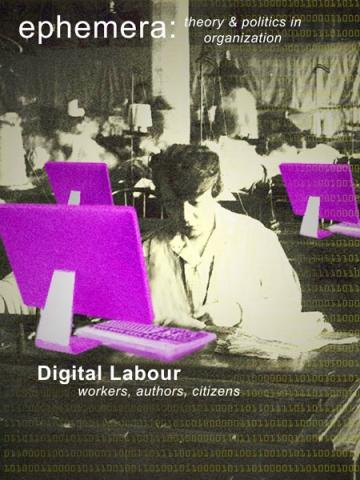 The papers in this issue of ephemera have their origins in a conference, ‘Digital Labour: Workers, Authors, Citizens’, held at the University of Western Ontario on October 16-18, 2009. Joining academics from Canada, the United States, the United Kingdom, France, Italy and New Zealand were activists from unions in Canada and the United States representing journalists, screen actors, screenwriters, library workers and university faculty. Yet while the papers at the conference converged around the shared problematic of digital labour, what made the event interesting was not only commonality but conflict, implicit or explicit. The readers of this collection will be able to tease out some of these tensions – between a strong showing of ‘autonomist’ Marxist variants, with their characteristic sanguine emphasis on worker power and resistance, and more classical Marxian political economy, with its more somber insistence on the dominating force of existing relations of production; between both of these and social democratic perspectives advocating the amelioration of digital labour conditions within a market context; and also, sometimes, between the theoretical concerns of all these positions and the practical priorities of the union and guild speakers.