Rather than through the usual framings I rather like to think about publications as strange places, as territories we can inhabit and explore. At their best they take you somewhere new that you can explore. Somewhere that you might indeed feel uncomfortable and unsettled by at first, but then as you acclimate you then find yourself making new friends, developing feelings of comradely with those you find there as well. Andre Breton declared that we publish to find comrades; I’ve found this to very much be the case with ephemera as I have with other publishing and media projects that I’ve been involved in (Shukaitis, 2019) or conducted research with. Such floating affects and relationships might indeed be ephemeral, for but for me they just as important as all the regular measurements and indications of what counts as a ‘high quality journal’, maybe even more so. I fully realize this is dangerously close to going full cheese and saying something like ‘the real treasure was the friends we made along the way’ – but the level of cringe contained in a statement is not an argument against the truth the claim.

The approach to philosophy, politics, and organization that I have developed comes from always looking for such strange places and those that reside within their undercommon time and spaces. I can honestly say that I’ve learned more from moments like that more so than in any classroom. And this holds true whether it’s one of countless late nights reading and talking about books at a twenty-four-hour diner, or conversations around global war and the general intellect taking place on a train going across Mongolia while eating ice cream (a la the 2005 ephemera conference ‘Capturing the moving mind’).

These are precisely the kind of moments and spaces that are increasingly hard to keep open within the constraints of the existing academic world where everything has to be known in advance, every outcome and project needs to have realistic and measurable goals, etc… Saying that you want to come up with a crazy interesting experiment without definite and measurable outcomes is more likely to get tossed out of the university. But for me this is what has been the most important thing about ephemera, its ability to exist as a space, both in terms of publishing and events, where you can take those risks with ideas and discussions, without having to worry that you’ve failed to live up to the existing and required metric. This ability to make and do things together, working through them together, is precisely what Stefano Harney and Fred Moten (2013) described as study – and it’s also precisely the thing you’re not longer able to do in the university.

Given that my main role at ephemera for a number of years (aside from editing an occasionally issue or two) has been working on cover design. Thus I thought it would be appropriate to include in my reflections a few of the back stories and strange places that led to the images that have been used on some of the covers. These are the aspects, the back stories of the images, that don’t usually get included in the journal, but perhaps they will still be of interest. If not, you’re always free to turn the page. But personally I’m still very glad the a publication as ephemera still exists precisely as a space for taking those risks with thinking, publishing, and working together that are simply not possible in the vast majority of other journals.

Before doing that I’ve been asked to provide a few thoughts on my working methods. To be honest I’m not sure I have anything as developed that could be described as a methodology. When I was in high school I studied art and photography, and thus found myself doing bits of design work with various projects I was involved in from bands to record labels, political organizing, and eventually publishing (Shukaitis, 2010). If I have anything like a method its simply that I often find myself working through and playing with an idea in visual form, whether through collage, painting, or photography before I’m able to articulate it in words. Perhaps this is something like the space that Deleuze and Guattari (1994) describe as the pre-philosophical moment which underpins and makes conceptual thinking possible. And that means when it comes time to design something specific, I often have a reservoir of half worked out ideas and sketches that I draw from for what’s needed. 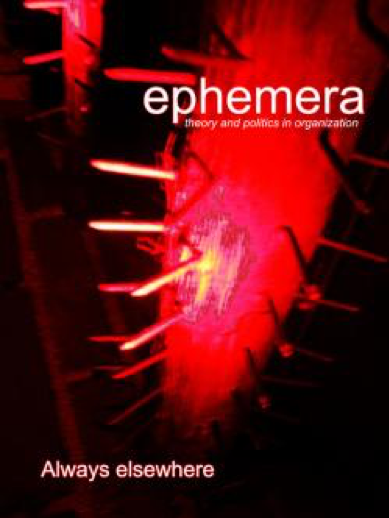 This image was taken at the Torture Museum in Amsterdam. Honestly I wasn’t quite sure what to do with a theme like ‘Always elsewhere’, but I figured if there was one experience that would lead to a strong desire always to be elsewhere from one’s current position, then being tortured would be a compelling candidate. The lighting in the museum is quite low, dark, and reddish, which rendered the torture instruments to look interesting but also mysterious enough that it was immediately obvious what they are. 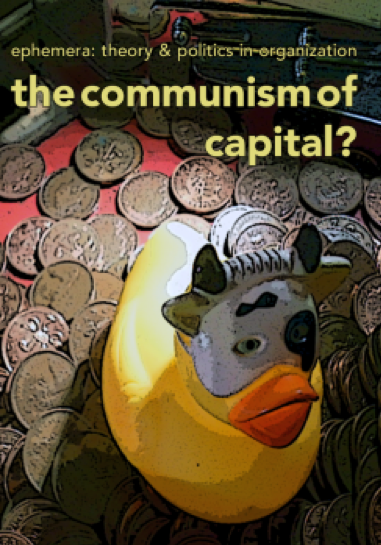 ‘The communism of capital’ has always struck me as a quite strange sounding concept despite knowing how and why it’s used within Marxist terminology (particularly when discussing the socialization of capital, and how such concepts were taken by in Italian operaismo). This image was taken at a games and gambling hall in Clacton-on-Sea. Why is there a rubber ducky wearing a cow mask sitting on a layer of coins? Why not? If you want a further explanation please reference the Third Italian Edition of Marx’s 1845 Grocery Lists. 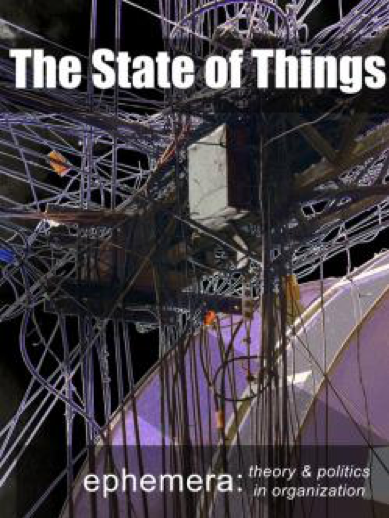 ‘This State of things’ comes out of a conference held at the University of Leicester, which was an attempt to bring together ideas from Actor Network Theory and Science and Technology Studies with concepts from post-autonomism. Thus I wanted to find an image that conveyed how technological decisions and developments are shaped around quite complicated, messy, and multilayered histories and conflicts. Admittedly I have no how or why this particular network of power exchanges in Phnom Penh, Cambodia, came to be quite this complicated, but I was willing to wager there’s an interesting back story here, and that would make it a fitting image for embodying that set of ideas. 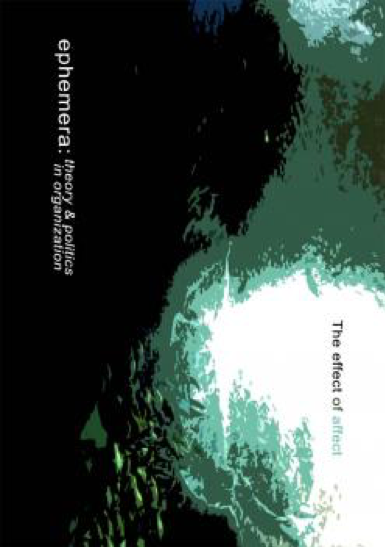 Given that affect is non-representational it always ends up being quite tricky for that matter thinking up an interesting and compelling image to… uhm… not represent it? Come to think of it, many of the areas and concepts ephemera covers regularly are not exactly to represent easily. Thus the approach ends up being more trying to think of an image would get people interested and is at least somewhat conceptually related to the topic, even if it’s not exact. I hope the covers and conference images that I’ve worked on have managed to do that, because if they’ve managed to get some people interested in engaging with some ideas, readings, and concepts they would have not otherwise than it’s definitely been a success. But back to affect. This image was taken in the tunnel going underneath the S.E.A. Aquarium in Singapore. It was a blistering hot day out when I decided to go there with my son Gustav, who was two at the time. And he wasn’t really interested in most of the aquarium. But then we walked through this tunnel it just felt totally immersive. It wasn’t just looking at some sea life, it felt almost like being another fish for a moment looking at the other fish. I don’t know how quite to put it in words (the affect is non-representational, remember?) – but I do remember standing there for almost an hour with my son just looking at things, immersed in that affect. As the old saying goes, the fish cannot see the water. But for the moment you find yourself immersed in the sensation of the water, you can’t go wrong with following Bruce Lee’s advice to ‘be as water, my friend’.

So is that where we end up, becoming water? Or maybe trying to constantly patch up our little boats of independent thinking as we’re increasingly cast on a sea of precarious academic work and the storm of disciplinary neoliberalism, ecological crisis, and various other catastrophes? Can we find ways to build our houses of thought on the sea, or does that risk ending up turning into a Costner-esque Waterworld style farce? Hopefully not. A journal, any journal, is not able to solve all those problems regardless of how quality it is or what appears in its pages. But if run well it does have a hope of opening a space where comrades can find each other, huddle together in thinking and being like floating otters, and maybe if lucky come up with an idea or two. And at the end of the day, maybe that’s the best thing a journal can do, set up a space and possibility to take risks, experiment with ideas, and to actually sit with and be with the thoughts, and those whom we think together with. And I don’t know about you, whoever is reading this, but I’m definitely up for another twenty years of that.

Shukaitis, S. (2010) ‘Sisyphus and the labor of imagination: Autonomy, cultural production and the antinomies of worker self-management’, Affinities, 4(1): 57-83.

Stevphen Shukaitis was a member of the ephemera editorial collective and is now an affiliate of ephemera. He is also the editor of the Minor Compositions imprint (https://www.minorcompositions DOT info) for Autonomedia.