Kill your darlings: The auto-iconoclasm of Blu’s iconic murals in Berlin

The sound of a megaphone shrills through a typical cold and drizzling Berlin December night. Some passers-by yell at us in anger as others silently wipe tears off their cheeks. ‘It’s the first time in my career as an artist that somebody is booing me’, says a voice next to me. We stop painting for a moment to watch the small crowd that has gathered on the other side of the fence, about 25 meters beneath our lifting platform. Albeit there is no time for introspection as almost 1000 square metres of brick wall still needs to be covered with black paint until the two murals by Italian artist Blu – often referred to as Berlin’s most iconic pieces of street art – will be fully erased. Seven years after the monumental wall pieces came into being, we felt it was time for them to vanish in an act of auto-iconoclasm – expiring along with the fading era in Berlin’s history that they represented. 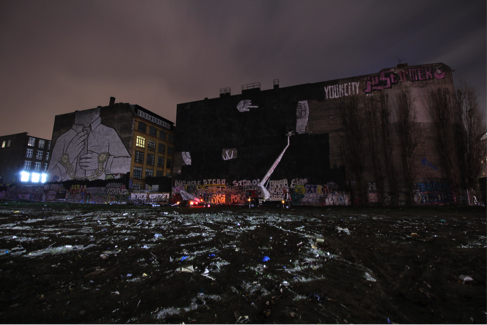 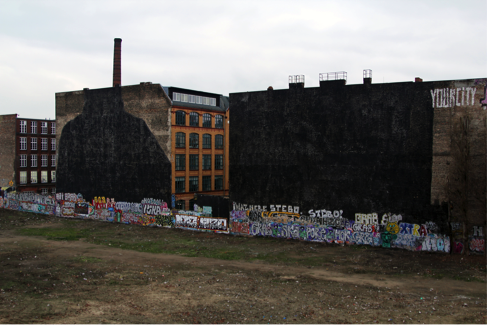 During their existence, the murals had evolved into beacons of the former border district Kreuzberg, symbols for the rigors it passed through. The first piece, a collaboration between Blu and French artist JR, depicts two figures in the act of unmasking each other, showing the ‘east side’ and ‘west side’ gang signs. It was a contribution to the exhibition ‘Planet Prozess’ which our ‘Kunstverein’ (cultural organization) had organized right across the street in a former secret food warehouse in West-Berlin (Senatsreservenspeicher). After the fall of the Berlin Wall the building had found itself useless and relocated from the periphery to the centre of the city. Not yet attractive to real estate developers for another decade, it served as headquarters for our artistic endeavours. In 2008, Blu and I had decided to repaint and to renovate the two figures, but instead spontaneously added a second mural on a wall next to them: a businessman chained by his golden watches.

In their monumental graffiti attitude the pieces boldly claimed (and captured) worldwide attention. They even seemed to transcend the status of mere depictions becoming part of what Siegfried Kracauer in 1930 referred to as ‘Raumbilder’: unconsciously produced spatial images that ‘are the dreams of society’ (Kracauer, 1964: 70). Unintentionally, we had created an ideal visual representation of the imaginary Berlin of the noughties and its promises: a city of voids granting plenty of space for affordable living and creative experimentation among the ruins of its recent history. 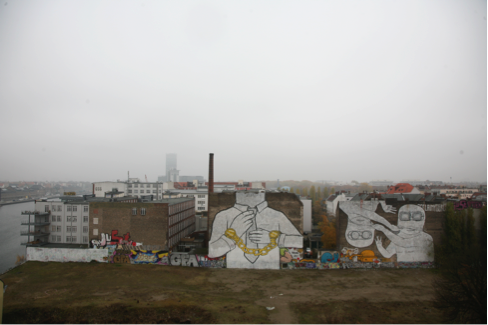 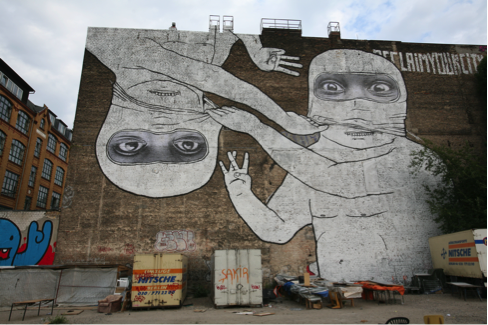 These features became the main attractions and the mantra of the recently departed city mayor Klaus Wowereit’s notorious ‘poor but sexy’ Berlin. The murals took their involuntary place in this reality as pilgrimage site of guided street-art-tours, and served as photo opportunities for countless greeting cards, book-covers or as backdrop for band-photos. Even the city used the allegedly subversive aesthetics of resistance for its marketing campaigns.

But by this time the neighbourhood already found itself in the thick of gentrification, with fierce protests against raising rents. And of course art – especially highly visible public art (just think of Banksy) – contributes to this process.

However, while Berlin on one hand prides itself on its art scene, its failed city development and cultural policy squandered much of the city’s rare spatial potential, and thereby also jeopardized the existence of its main attraction – the artists. They found themselves in the paradox situation of being their own nemesis, perpetually contributing to their own displacement.

An ‘innovative’ touch to Berlin gentrification is that lately it does not content itself with the destruction of the autochthonous art spaces. Depending on the attractive power of art, it tends to artificially reanimate the previously assassinated wild and provisional creativity. The frequently mourned ‘murdered city’ evolved into the un-dead city of an artificial artistic amusement park. This zombification is threatening to turn Berlin into a museum-like city of veneers with preserved, once-fleeting art forms as taxidermic attractions for those who can afford the rising rents.

Blu’s murals can be seen as a simulacrum of these developments: the initial elation and spirit of possibilities, the urban changes and arising protests, the squatting and subsequent eviction of its neighbouring waste land, the destruction of our own art space (the Senatsreservenspeicher) to build for the ‘creative Berlin’ – it all is inscribed in the images. A pars pro toto that might help to narrate and discuss this chapter of Berlin’s recent history.

Still, why would an artist agree to destroy his own acclaimed work instead of endorsing official attempts to preserve it as a public work of art? Out of despair? Clearly not. Rather out of sorrow, as early online-comments like ‘heartbreaking’ suggested. Public art inevitably is subject to valorisation with all its pros and cons. And even more important becomes the awareness and retention of responsibility for these valorised creations, e.g. by transforming them into tools to reveal certain processes, clarifying that they happen not in our name.

From the first moment of their existence, Blu’s murals were doomed to disappear. It is the nature of so-called street art to occupy space in celebration of its uncertainty, being aware of its temporality and fleeting existence. At first every image is an erasure of the reality it comes upon, especially in the public domain. Consequently, it must be capable to not only overcome preceding pictures but also to accept its own death.

The thousands of reproduced and digitally spread-out motifs of the murals certainly will last in an immaterial way next to their new tangible condition. They are part of a collective Berlin imaginary. Now more than ever.

For me the white – well, in this case black – washing also signifies a rebirth, a return from the (soon to be un)-dead: As a wake-up call to the city and its dwellers, a reminder of the necessity to preserve the affordable and lively spaces of possibility, instead of producing un-dead taxidermies of art. It prompts a dialogue with the city’s reality, stressing the capability and social function of artistic interventions where others fail to advance.

Over to you, Banksy.

Lutz Henke is a cultural scientist (M.A.) and curator focusing on art in the public domain. He has been awarded a grant from Olafur Eliasson’s ‘Institute for Spatial Experiments’ at the University of the Arts Berlin and taught in the Masters program ‘Spatial Strategies’ at the Berlin Weißensee School of Art. Henke realizes artworks in close collaboration with the artists, such as Santiago Sierra or Wermke/Leinkauf, and works with a variety of institutions and museums. Until 2014 he directed the independent art space Senatsreservenspeicher in Berlin-Kreuzberg. His curatorial and research practice focuses on spatial practice and theory, memory and remembrance, aesthetical interventions and frontiers in their diverse appearances.